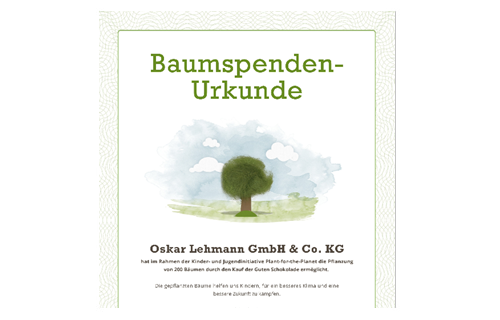 In order to become even more sustainable, including in the area of customer give-aways for trade fairs and so on, we made the decision in 2019 to purchase a sustainable organic chocolate product. The brand we chose is called “Die Gute Schokolade”, which simply means “The Good Chocolate”. The product is a milk chocolate bar featuring the Fair Trade logo and the Plant-for-the-Planet logo.

This means that by buying this chocolate, OL is financially supporting this cause and thus making a contribution to sustainability. This contribution has now been confirmed by the certificate displayed here. We were delighted to receive this wonderful certificate!

“Plant-for-the-planet” is a foundation that was founded in February 2007 by Felix Finkbeiner, who was only nine years old at the time. It mainly addresses children and young people. Its stated goal is to raise awareness among children and adults of global justice and the climate crisis, and to tackle the latter by planting trees. At that time, Felix Finkbeiner apparently had the idea that children in every country could plant one million trees.

In 2011, children then had the idea of joining forces with industry players, planting trees with every product sold. That is how this special organic chocolate, which is now available in many German supermarkets, came into being. If you want to find out more about the origins of the foundation, follow this link:

The success story of Plant-for-the-Planet

So if you like to know that the sweet chocolate you are enjoying is also fairly traded and you want to do something for the environment at the same time, why not buy “Die gute Schokolade”?